Hydrogen peroxide is a chemical compound with a colorless liquid. It is unstable and slowly decomposes in the presence of a base or catalyst.  Diluted hydrogen peroxide has many uses in the house and garden because of its antiseptic and oxidizing properties. Using hydrogen peroxide for gardening saves your money, time and is environmentally friendly.

Hydrogen peroxide serves best by releasing oxygen as a supplement for plants. It also helps by aerating the soil, as the bleaching agent and disinfectant in your garden.

Here are 10 major applications that can be helpful in your garden using hydrogen peroxide.

It is also good to mix hydrogen peroxide into the soil when you sow seeds in the garden as it kills the pathogens present on the seed coat.

Hydrogen peroxide can be used in the garden to strengthen the root system of your plants. Mix 1tspn of 3% of hydrogen peroxide with a gallon of water. When you spray this solution on plant roots, it absorbs the nutrients effectively from the soil.  You can use this solution occasionally to boost the plant growth.

Though some bugs and insects are helpful, few insects can damage the plant growth. Using hydrogen peroxide solution may give you a better result. It is safe to use and keep insects away.

Mix a teaspoon of hydrogen peroxide with 8 ounces of water if garden plants are infected by pests. This solution can reduce the insects in your garden. It also kills eggs and larvae of moths and other harmful insects.

Soil aeration is important for all varieties of garden plants. Providing enough space for air and nutrients to the soil will boost the plant growth. Plants may die due to the bad maintenance of the soil. Soil should be the type of vermiculite or perlite with porous rocks. It helps to retain water content in the soil. Other sources like peat moss, manure, and organic compost are mixed with sand in myriad ways to meet nutrient levels and soil ph.  It also aerates and adds sufficient oxygen levels to the plants.

Use strong hydrogen peroxide (up to 10%) to kill weeds in unwanted areas of your garden. You can pour the solution directly into the weed-prone areas or cracks in the evening or early morning for better results. Be careful while using this method. Wear protective tools and spray the concentrated hydrogen peroxide solution only on weeds; not on benefitted plants. It kills the unwanted weeds in your garden and looks beautiful. After using this solution, immediately wash your hands with cold, running water.

Garden plants may become weak due to the effect of fungal infections on plants. Mix 4tspn of hydrogen peroxide (up to 3%) with water in a spray bottle. Use this solution on the plants that show the signs of powdery mildew, white spots, rust and other fungal infections. Too much of this solution can damage the plant tissues. To maintain proper dilution before applying on plants.

Bacterial infections may damage the fruits, flower buds, bulbs, and tubers. Cuts and bruises are the major cause of bacterial infections. Insects like pinworm, spider mite, flea, ringworm, tic, and tapeworm also spread the disease or infections on plants. It has a great impact on plants and immediately you need to find out the solution for such problems.

Hydrogen peroxide is the best choice for gardeners to protect your plants. Simply spray the solution on plants or apply it on fresh cuts after pruning. Bulbs and tubers can be dipped into the solution when they are ready to store in the refrigerator.

Gardening tools include pruning shears, axe, shovel for properly maintaining and harvesting the plants. They are also used for removing weeds, trimming plants, pruning bushes and for digging soil.  Tools must be cleaned before it gets disinfected.

Mix hydrogen peroxide with a gallon of water as prescribed on the label. Now you can spray the solution on garden tools or dip them in a mixture.  It completely eliminates the rust, algae, fungus, bacteria, and spores on tools and looks like new, shiny again.

The hydroponic system is a method of growing plants without soil i.e. using water as a solvent medium for supplying nutrients and minerals. In hydroponics nutrients may be supplied in the form of fish waste or duck manure. The best way to provide nutrients is by adding hydrogen peroxide to the water. Addition of hydrogen peroxide to the water keeps the plants healthy. It also supplies extra oxygen levels to the plant roots and aquatic life.

Hydrogen peroxide also prevents root rot which is the major problem in hydroponics as it completely decomposes into water and oxygen. It is safe to use than any other chemicals to fight against rot. 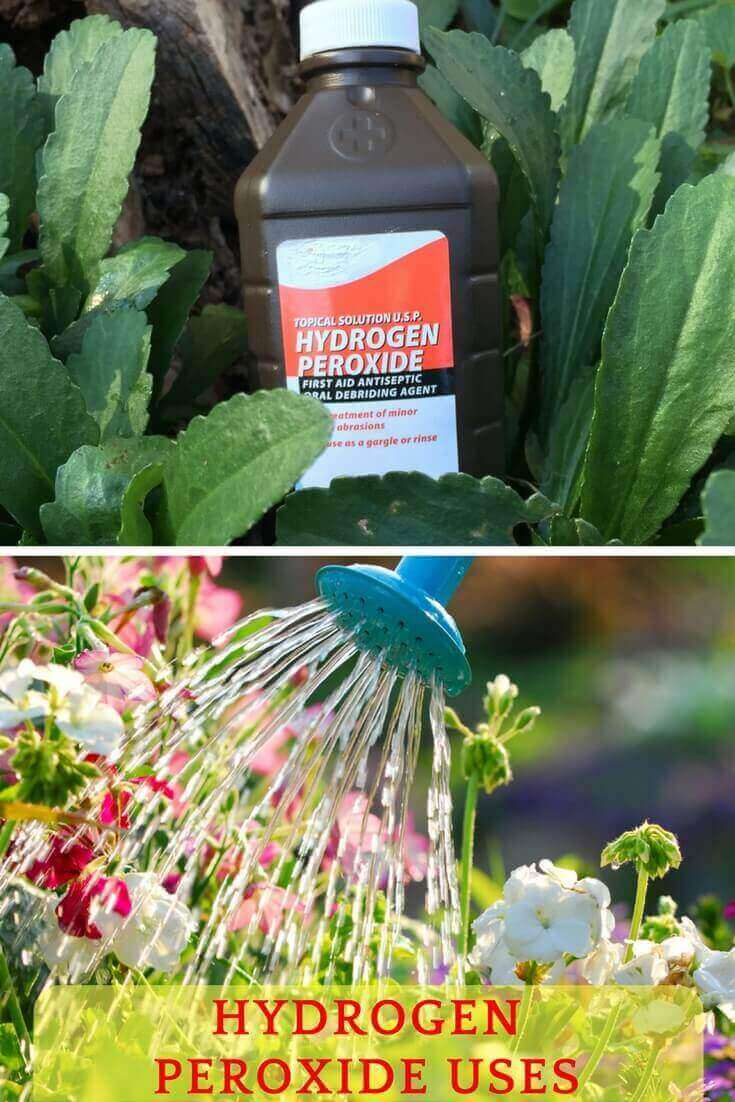 Start using dilute hydrogen peroxide in your home and garden that has myriad applications for promoting plant growth. If you have amazing ideas about using hydrogen peroxide, please share your experience with us.